LYNNWOOD -- Edmonds College volleyball player Sadie Gardner has been named as the 2020 Snohomish County Collegiate Female Athlete of the Year. The award is given annually by the Snohomish County Sports Commission as part of the County's Hall of Fame banquet. This year's ceremony is being done virtually.

Gardner finished her stellar two-year career this past fall and will continue her academic and athletic journey at NCAA D-I Idaho State University in Pocatello, Idaho. The Bengals compete in the Big Sky Conference. 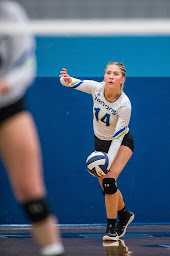 The outside hitter prepped at Uintah High School in Vernal, Utah and was a stalwart at EC for coach Tony Miranda. The talented sophomore led the team in kills and was an overall contributor, consistently notching aces, digs, and blocks in most matches. Gardner earned the North Region Offensive Player of the Week the final three weeks of the season, and was a two-time NWAC North Region 1st Team selection.

In her two years as a Triton she helped the program to back-to-back NWAC playoff appearances, including the North Region title and a 4th place finish in 2018. In Gardner’s time on the floor, Edmonds was 60-22 overall, including a 21-3 mark in the North Region. The two-year stretch will go down in program history as one of the most successful ever.

Gardner, a captain on the 2019 squad, received AVCA NWAC All-American honors and was named to the NWAC All-Academic Team for her work in the classroom. She moves on with her Associate in Arts transfer degree and plans to major in Nutrition and Dietetics with aspirations to become a registered dietitian and start her own business.