Triton Baseball swept four games from Shoreline CC over the weekend to open conference play. Edmonds pitched back-to-back shutouts, 2-0 and 1-0, at home on Saturday. The Tritons pushed across 16 runs on Sunday at Shoreline, winning games three and four 7-2 and 9-2.

All four starting pitchers collected wins for Edmonds. Brian Way earned his team-leading 4th victory of the season in the opener, scattering 6 hits and going all 9 frames for the complete game. Blake Randazzo followed him in game 2 with 6 1/3 innings of 2-hit ball before being removed after a comebacker hit him in his throwing arm. On Sunday, C.J. Blowers struck out 9 batters in 6 innings in the first tilt; Jared Gray closed the series allowing no runs in 7 innings of work.

Jesse Moore was the offensive star of the series for the Tritons. The sophomore was 8-for-14 in the four-game set, upping his average to .380. His RBI triple in the 4th inning of the opener ended up being the game winner – EdCC prevailed 2-0. Moore added 5 more hits on Sunday at Shoreline.

Chris Okura’s RBI single in the bottom of the 3rd was the difference in EdCC’s 1-0 game 2 triumph. Nick Johnston’s 2 2/3 innings of scoreless relief earned him the save after taking over for Randazzo. Daniel Bateman had 3 hits in the game for the Tritons.

Shane Hanon saved the day in game 1. In the top of the 9th the Dolphins had runners on the corners with 1 out when Drey McInnes lined one deep into the left-center gap. Hanon made an over-the-shoulder catch on the run, and relayed the ball in to first base to double off the Dolphin runner and end the game. Hanon also had a hot bat on Sunday, ripping 4 hits which included a triple and his first home run of the season. He was 2-for-3 with 3 runs scored in the Tritons’ 7-2 game 3 win.

Garrett Gallinger led the charge in the series finale. Gallinger was 4-for-5 with a triple and RBI in a game where Edmonds used two 3-spots in the 1st and 3rd innings to jump ahead 6-0 early. Steven Weber added 3 RBI in the 9-2 victory. Edmonds led both contests from start to finish on Sunday. Shoreline dropped to 5-15 on the year and will face Everett CC next weekend.

EdCC (15-5, 4-0 NWAC North) has a bye week this weekend. Their next series is scheduled for April 16-17 versus Olympic College.
Posted by EdCC Tritons at 4:13 PM No comments: 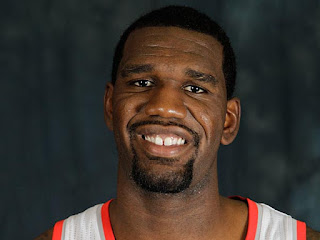 A 7-0 center, Oden battled injuries during his 7-year NBA career. He was recently cut by the Jiangsu Dragons of the Chinese Basketball Association. As a member of the Dragons, Oden averaged 13.6 points and 12.6 rebounds a game.

“Well, he is only 28. There are a ton of guys in this league who are older,” said Gray about the signing. “Since he only played one year at Ohio State, we think he can play a year with the Tritons. Who knows? It might get him back on track for another shot at the NBA and we can always use a big man.”

Oden helped lead Ohio State to the NCAA title game in 2007 against Florida. Oden scored 25 points and had 12 boards in the losing effort. The first pick by the Trailblazers that year, Oden was finally cut in 2012 and signed with the Miami Heat during the 2013-14 season.


Asked about Oden’s professional career as it pertains to NWAC eligibility, Gray laughed: “Well, it was the Trailblazers for Pete's sake. It’s not that professional there anyhow – I mean it’s not like the Lakers and their incredible amount of Championships (16). Now that’s a franchise -- a dynasty really!”