LYNNWOOD - The EdCC softball team evened its overall and league marks to 6-6 and 2-2 respectively after sweeping Shoreline 16-8 and 11-2 Saturday at Triton Field. Kaytlin Baleat tossed two complete games for EdCC while the offense pounded out 34 hits in the two contests halted by the 8-run mercy rule.

After two scoreless innings in the opener it was the Dolphins that scored first, pushing three runs across in the third. The Tritons responded with two in the bottom of the third and then exploded for eight in the fourth.

EdCC was a run away from ended the game in the fifth, but that eighth run proved elusive. SCC scored once in the fifth and four more times in the sixth to make the score 10-8, Edmonds.

The Dolphins (1-5, 0-2 North) looked as if they had all the momentum on their side but EdCC's offense tallied six runs in the bottom of the frame, capped by a base-clearing triple from Shawna Steele. Those three runs ended the opening game.

Every Edmonds starter had at least one hit. Madison Wood and Lexie Gray each had four hits with Steele and Ryan Fazio each collecting three hits. Steele drove in five; Fazio and Antoinette Watson both drove in three.  Hollie Sharp and Chantel Brown both went 2-for-4 in the win.

Balyeat (6-6) allowed just one earned run in the nightcap. Meanwhile the EdCC offense pushed runs across in every frame, with three spots in the first, second and fifth.

The Tritons welcome Olympic College on Tuesday (weather permitting). First pitch is scheduled for 4 p.m.
Posted by EdCC Tritons at 10:55 AM No comments:

LYNNWOOD – The NWAC defending champion Edmonds CC baseball team opened up North Region play with a four-game series against arch-rivals Bellevue. In 2014, the Tritons and Bulldogs finished 1 and 2 atop the North standings, played for the North Region Tournament title and met in the NWAC championship game. After four games in 2015, it’s a draw as both squads claimed two wins.

On Saturday, BC took game one at Courtier Park 3-1 with EdCC cruising to an 11-1 win in the nightcap. It was more of the same Sunday at Triton Field; Bellevue beat Edmonds in the 7-inning opening tilt 2-0 with EdCC evening things out with an 11-7 game two triumph.

With the split Edmonds is now 15-6 overall, 2-2 in North play while the Bulldogs are 15-7, 2-2. Unfortunately, the two region powerhouses won’t meet again unless it’s at the NWAC tournament in May.

Zander Clouse (4-0) went the distance for Bellevue in Saturday’s opener, allowing just three hits and one earned run. Riley Storedahl (3-1) was the hard-luck loser for EdCC. Storedahl tossed six strong frames in which he fanned five, but a 3-run was all that the Bulldogs needed.

Alec Kisena and Nate Richards combined to six-hit BC in the 11-1 nightcap win. Kisena (4-0) went seven innings to earn the win, yielding just four hits and no runs while fanning nine.

The EdCC offense knocked out 13 hits to back their freshman hurler, scoring two in the second, one in the third, two more in both the fourth and eighth and four in the sixth. Third baseman Jaime Umbinetti went 3-for-3 with three RBI to lead EdCC. Conor Plaisance, and Jesse Moore each had two hits and two RBI.

Starters Cody Anderson and Kameron Miner dueled for seven innings when the series shifted to Lynnwood on Sunday. Miner (1-2) allowed just six hits for Edmonds but he yielded single runs to the Bulldogs in the fourth and sixth frames. Trai Patrick and Evan Johnson collected RBI hits for Bellevue. Anderson (2-0) gave up just three hits to lift BC to the win.

The Bulldogs struck for four first innings runs in the nightcap, but the Tritons would chip away with two in the second, two both the fourth and fifth and four in the sixth to take a 10-5 lead. BC pushed two across in the eighth but it was too-little-too-late as EdCC hung on 11-7.

Leading the charge offensively was Steven Weber who went 4-for-5 with four runs scored and three RBI. Tanner Wessling added three hits to the tally with David Garza going 2-for-6. BC helped out with three crucial errors which led to three unearned Triton runs.

Blake Randazzo started for EdCC but was replaced in the fourth by Brian Way. Way (3-0) picked up the victory with 3.1 scoreless frames on the hill. Nate Johnson tossed one inning with Brady Batt closing out the ninth 1-2-3.


Edmonds has a bye this coming week, though the team will host its Alum for a scrimmage this Saturday at 2 p.m. EdCC will host Green River on Wednesday, April 8 at 4 p.m.
Posted by EdCC Tritons at 10:19 AM No comments: 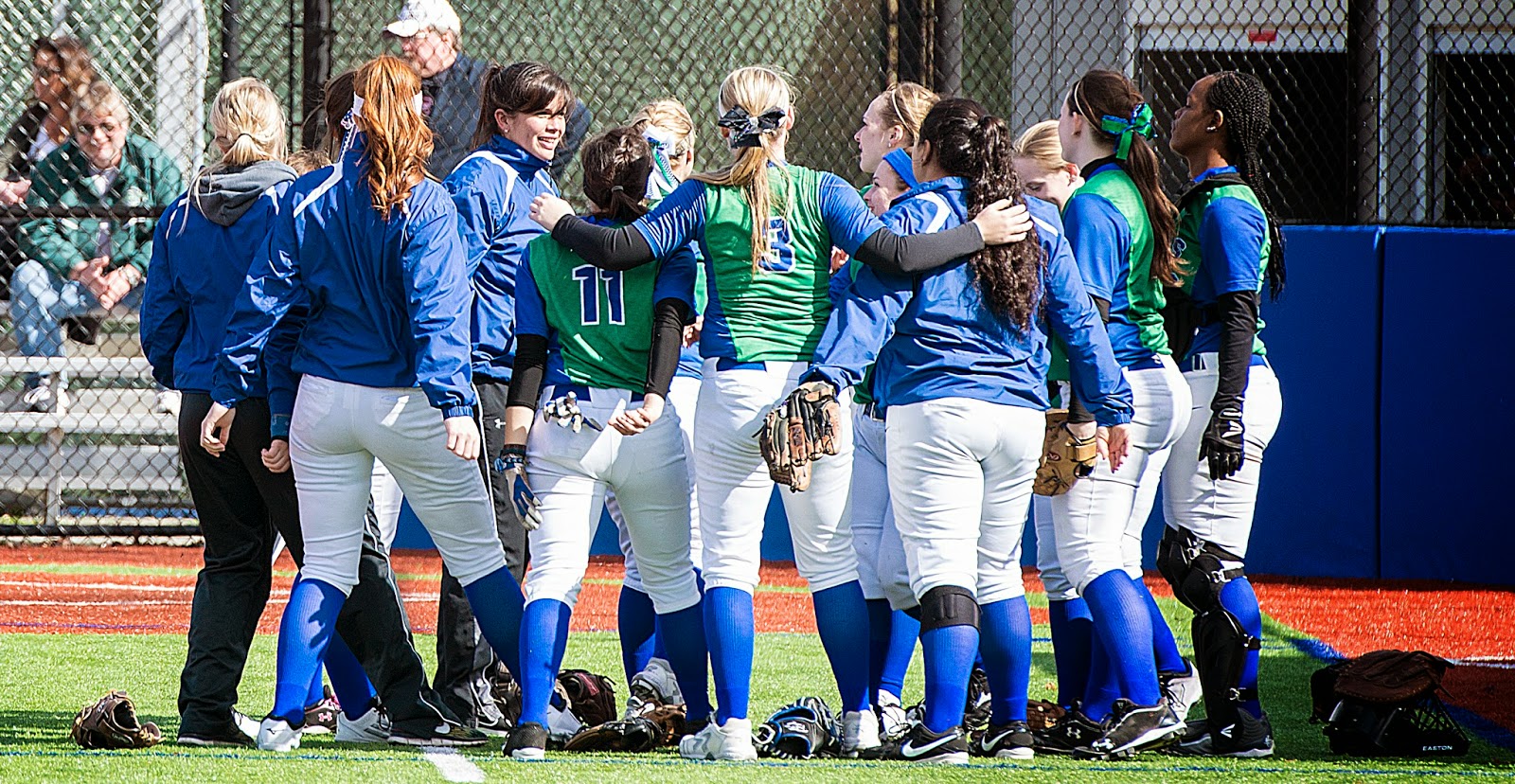 LYNNWOOD - The EdCC softball team improved to 4-4 on the year after sweeping Highline at Triton Field Saturday 16-15 and 12-11. The wild twinbill saw Edmonds rally for seven runs in their final at-bat in the opener and nearly blow what looked like a sure victory in the nightcap.

The Tritons trailed early in game one. The Thunderbirds jumped out to a 4-0 lead in the top of the first. Third baseball Madison Wood blasted a two-run homer in the bottom of the frame to pull EdCC to within two runs.

The Tritons then scored five runs in the bottom of the third to take a 7-4 lead. All five runs came after two outs were recorded. Riley Davidson, Lexie Gray, Audrey Rausch and Hollie Sharp and delivered RBI hits.

Kaytlin Balyeat, who had been thrown three scoreless innings, gave up 11 runs over the last three frames with EdCC scoring two runs in the sixth when Shawna Steele homered. Still, Edmonds was down six runs heading into the bottom of the seventh.

The Tritons came through with six hits to plate six runs, however, and with two outs the HCC shortstop threw the ball away on a grounder, Davidson scoring to complete the rally and give EdCC the walk-off win.

Steele and shortstop Ryanne Fazio each had four hits in the opener, with Wood, Rausch and Sharp collecting three hits apiece.

Game two was wild, with HCC batters hitting out of order and strange calls like runner's interference. The Triton offense scored 10 runs through four innings and the team went into the top of the fifth with a 10-1 lead.

Two outs were quickly recorded and the game seemed sure to be stopped via the 8-run mercy rule. But an indecisive play on an easy grounder allowed HCC to load the bases. The Thunderbirds would go on to plate five runs in the fifth, four more in the sixth and one in the seventh. EdCC pushed one run across in the fifth.

Tied 11-11 in the bottom of the seventh, EdCC plated the winning run when Wood hit a liner that deflected off the HCC third baseman's glove, allowing Rausch to score from third.

The two teams totaled 28 hits in the game. Catcher Antionette Watson led EdCC with two hits and four RBI. She hit a homer, as did center fielder Chantel Brown.

Bayleat went the distance for EdCC in both contests and earned two wins.

Edmonds opens up North Region play with two against Everett CC on Thursday, March 28. First pitch at Triton Field is slated for 4 p.m.

EdCC will face #3 Clark College in the NWAC championship game. The Penguins (24-6) defeated Green River 55-41 in the day's other semifinal.

Monday's margin of victory was 12 points but it wasn't easy and it wasn't always pretty. Edmonds (27-5), entered the second half with a 5-point lead but failed to score for nearly five minutes in the second. The Pirates eventually went up by seven points while the EdCC offense scuffled.

Triton guard Charlie Smith sank a three to stop the bleeding, with Sunday's hero Ian Tevis following with a jumper to cut the deficit to two.  Blake Fernandez scored his first points of the game on back-to-back possessions after a couple of buckets by PC and the EdCC offense finally started to gain momentum.

Tevis made a field goal at 8:44 to give EdCC a 49-48 advantage. The Pirates would retake the lead at 4:48 but a Zach Pederson bucket evened the score at 57-57. That basket started a 14-0 run that put the game away for Edmonds as PC would not record another point in the semifinal tilt.

"It was a tremendous defensive performance as a team," said Gray. "We held their two main scorers to single digits and our defense held on long enough for our offense to wake up and hit some clutch shots."

Edmonds started the contest strong thanks to a pair of treys by Devin Stoen. It looked early on that the Tritons would go up by double-figures. The Pirates rebounded, however, and eventually took the lead. EdCC would go into the half up by five. A big play in the opening half was a rebound and an and one by sub Umut Akkepenek.

Pederson led EdCC with 12 points and 14 boards with Stoen and Smith each with 11 points. Tevis added 8 points and Fernandez had 7 points and 5 assists in the win.

Chris Reis and Jal Dang each had 11 points for Peninsula. The Pirates (16-13) will play Green River in the 3rd-place game at 2 p.m.

Edmonds reached the title game in 2012, only to lose to Chemeketa. The lone championship for EdCC came in 1985.
Posted by EdCC Tritons at 9:54 PM 1 comment: