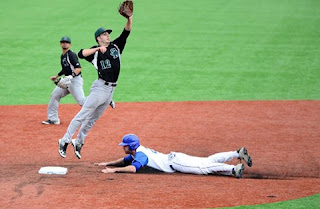 In the season opener Chandler Arends (So., Kent, Wash.) earned his first win, scattering three hits and striking out seven Gators in five innings of work. Nick Johnston (So., Sequim, Wash.) took over and hurled four shutout frames for the save. Steven Weber (So., Seattle, Wash.) had the big blow offensively in the third, launching a three-run home run into the visitor’s bullpen in right field.

It was a grand slam that helped Edmonds top SWOCC in the nightcap Saturday. Daniel Bateman (Anacortes, Wash.), a freshman who was pinch-hitting in his first collegiate at-bat, sent a missile into the left field netting with the bases juiced in the bottom of the sixth. Blaze Randazzo (So., Federal Way, Wash.) got the win, fanning seven batters and allowing no earned runs in six frames of work.

The Tritons split with Southwestern Oregon on Sunday, taking the first game 13-2 in a game that was called after 7 innings mercy rule. SWOCC rallied in the second game to beat EdCC 4-3.

Brain Way provided a solid start on the mound in Sunday’s first game and recorded his first win of the year going six innings. The Triton offense used an 11-hit attack to end the game after seven innings because of the mercy rule. Jesse Moore (So., Port Orchard, Wash.) was 2-for-4 and capped a nine-run third inning with a grand slam. Three other Tritons collected two hits a piece: Daniel Bateman, Shane Hanon, and Justin Polzin.

After leading 3-1 through the first four innings of the second tilt, SWOCC’s Sam Mitchell hit a ball to the deepest part of park, and just over the outreached arm of Triton centerfielder Spencer Greene. The play ended up being the game-winner, as Mitchell raced around the bases for a three-run inside-the-park home run. Jared Gray (Fr., Auburn, Wash.) was hung with the loss despite a strong outing on the bump. SWOCC starter Dylan Pierce allowed two hits and surrendered five walks but worked out of jams to keep the Triton bats at bay for six innings.

Edmonds (3-1) has added a single nine inning non-league game with Green River on Wednesday. First pitch from Triton Field is set for 4 pm.
Posted by EdCC Tritons at 3:14 PM 1 comment:

LYNNWOOD -- Thanks to EdCC’s 95-84 win at Skagit Valley on Saturday and Bellevue’s defeat of Everett on Sunday, the Tritons ended up the regular season with an 8-6 record in the NWAC North, good for second place in the final standings. Edmonds, as the second seed in the North, will host East #3 Yakima Valley in a NWAC First Round Playoff Game on Saturday, March 5. Tip-off in Seaview Gym is at 5 pm.

EdCC (19-8 overall) closed the regular season with two straight wins, rebounding from a prior five-game skid. Freshman Loren LaCasse led Edmonds with 26 points Saturday with Devin Price chipping in with 14 points and both Jas Coulson and Dylan Carter adding 12 points to the Triton tally. Giovanni Williams went 5-6 from the field for 11 points.

The Tritons shot 64.2 percent, a far cry from the low percentages they were putting up during the losing streak. EdCC also out-rebounded the Cardinals 32-23. SVC finished the season 11-16 overall, 4-10 in North play.

Edmonds qualified for the postseason for the fourth straight season. Visiting Yakima Valley comes into Saturday’s playoff tilt on a four-game streak with a 15-13 overall mark, 9-5 in East play. The Yaks are led by Max Jones who averages 18 points and 6 rebounds a game. Demetrius Trammell is right behind, averaging 17.46 points a game. Cameron Jensen and Tyler Cluff put up 9.96 and 9 points per contest.

Since the first round game is considered a NWAC event, EdCC will operate under league guidelines. Ticket prices for Saturday are $10 general admission, $7 for seniors/ military and children 7-12 years old. Children under six are free. NWAC students that show an EdPass will be allowed in free.

If you cannot make the game, you can watch live at: https://www.youtube.com/watch?v=yioHGbcbzwY


The first round is single-elimination, loser-out format. The winner of the eight first round games advance to Everett CC, the final site of this year’s NWAC tournament. Tournament Information.
Posted by EdCC Tritons at 3:06 PM No comments: